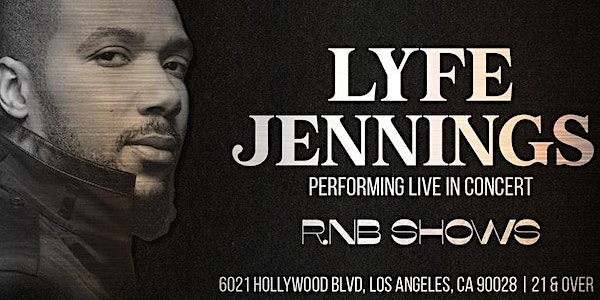 Be part of the experience!! The Biggest Day Party In Los Angeles Happening Sunday May 15th @ Academy LA

( Lyfe Jennings ) Live In Concert Singing All His Rnb Hits

Book your table at one of the premium venues in Los Angeles / Hollywood book today! Tables are limited. Table / Bottle Reservations Available : Text or call today 213.277.7171

Option: Tickets and Tables will be avaible at the door early arrival is suggested. First come first serve with tables. Once were sold out were sold out. Please note this is not a ten minute sing one song seeing your favorite artist drink from a bottle hosting. This is a full concert with Lyfe Jennings singing all his hits. Performance will begin @ 8:30pm

*** All Ticket Sales are Final. No Refunds or Exchanges. Customers Agree To Terms Upon Purchase. ***

This event will follow all local and state mandates

Djs – Promoters – Local Artist interested in being apart of this event or future events email us @ rnbshowsla@gmail.com

Jennings began singing at a young age in a Toledo church choir. He later joined a group called The Dotsons with two of his cousins and his older brother, Jay. The group separated in the early 1990s, and Jennings rediscovered music and started a music program at an Ohio prison where he was serving a ten-year sentence on an arson-related charge. He has cited Erykah Badu’s 1997 album Baduizm as one of the reasons for his rediscovery. Jennings was released from prison in December 2002 and started to pursue a solo career in music. In January 2003, he performed in Showtime In Harlem at The Apollo. The same year, he also independently released his first EP, What Is Love. To further pursue his career, Jennings moved to New York City where he performed at rapper Nelly’s concert at Radio City Music Hall, at an NAACP convention where he performed an original song called “Thank God for the NAACP”, and at the Cafeteria in Chelsea, Manhattan during the blackout on August 14. He signed with Columbia Records and released his debut album Lyfe 268-192 (268-192 was his inmate number) in August 2004. His first single was Stick Up Kid, which didn’t see much sucess until after the album was released. The album featured his hit single “Must Be Nice”. Jennings’ second album The Phoenix was released in August 2006. The first single, “S.E.X.”, feautures Jennings’ protégé, singer LaLa Brown.